The Gothic spires that dominate Rīga’s cityscape might suggest austerity, but it is the flamboyant art nouveau that forms the flesh and the spirit of this vibrant cosmopolitan city, the largest of all three Baltic capitals. Like all northerners, it is quiet and reserved on the outside, but there is some powerful chemistry going on inside its hip bars, modern art centres and the kitchens of its cool experimental restaurants.

Standing next to a gulf named after itself, Riga is a short drive from jet-setting sea resort Jurmala, which comes with a stunning white-sand beach. If you are craving solitude and a pristine environment, gorgeous sea dunes and blueberry-filled forests begin right outside the city boundaries. It’s like a huge painting in front of which you spend hours staring at it, as your eye detects more and more intriguing details. But in fact this must-see Riga sight is a rather functional street with residential houses, restaurants and shops. Art nouveau, otherwise known as Jugendstil, is the style, and the master responsible for most of these is Mikhail Eisenstein (father of filmmaker Sergei Eisenstein). Named after the founder of Riga, Bishop Albert von Buxthoeven, the street was the architects’ gift to Riga on its 700th anniversary.

At 2A Alberta street there is a building constructed in 1906 with serene faces with chevalier helmets stand guard atop the facade, which noticeably extends far beyond the actual roof of the structure. Screaming masks and horrible goblins adorn the lower sections amid clean lines and surprising robot-like shapes. Most noticeable are the two stone satyr phoenix-women that stand guard at the front. The facade of the building next door is in much better condition.

The three heads on Alberta iela 4, two doors down from 2a, will surely capture your attention. If you look carefully, you’ll see a nest of snakes slithering around their heads, evoking Medusa. All six eyes seem transfixed on some unseen horror, but only two of the faces are screaming in shock and fear. Two elaborate reliefs near the entrance feature majestic griffins, and ferocious lions with erect, fist-like tails keep watch on the roof.

Further down the street, the Riga Graduate School of Law at Alberta iela 13 epitomises Jugendstil’s attention to detail. Peacocks, tangled shrubs and bare-breasted heroines abound while cheery pastoral scenes are depicted in relief on Erykah Badu–like turbans atop the giant yawning masks. The triangular summit is a mishmash of nightmarish imagery: lion heads taper off into snake tails (like Chimera), sobbing faces weep in agony and a strange futuristic mask stoically stares out over the city from the apex. 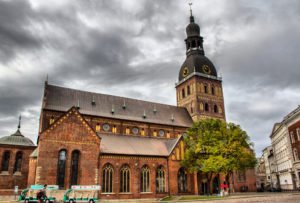 Founded in 1211 as the seat of the Riga diocese, this enormous (once Catholic, now Evangelical Lutheran) cathedral is the largest medieval church in the Baltic. The architecture is an amalgam of styles from the 13th to the 18th centuries: the eastern end, the oldest portion, has Romanesque features; the tower is 18th-century baroque; and much of the rest dates from a 15th-century Gothic rebuilding.

During Soviet times services were forbidden, but the building, along with its huge 6718-pipe organ, built in 1884, underwent a careful reconstruction in 1983. It was used as a classical-music venue, which it very much remains now, although services have been resumed since the Lutheran archbishop of Latvia moved in.

The floor and walls of the huge interior are dotted with old stone tombs – note the carved symbols denoting the rank or post of the occupant. Eminent citizens would pay to be buried as close to the altar as possible. In 1709 the cholera and typhoid outbreak that killed a third of Riga’s population was blamed on a flood that inundated the tombs, whereupon new burials were banned. Built in 1344 as a veritable fraternity house for the Blackheads guild of unmarried German merchants, the original house was bombed in 1941 and flattened by the Soviets seven years later. Somehow the original blueprints survived and an exact replica of this fantastically ornate structure was completed in 2001 for Riga’s 800th birthday.

It was here, on Christmas Eve in the year 1510, that a merrily intoxicated bunch of lads schlepped a great pine tree up to the clubhouse and decked it flowers before setting it ablaze at the end of the night – and the tradition of the Christmas tree was born. 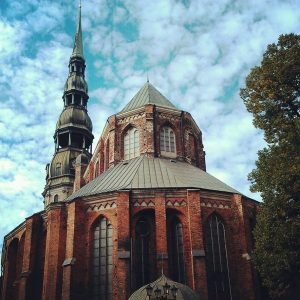 Forming the centrepiece of Riga’s skyline, this Gothic church is thought to be around 800 years old, making it one of the oldest medieval buildings in the Baltic. Its soaring red-brick interior is relatively unadorned, except for heraldic shields mounted on the columns. A colourful contrast is provided by the art exhibitions staged in the side aisles. At the rear of the church, a lift whisks visitors to a viewing platform 72m up the steeple.

The church’s austere Gothic outlook is softened by baroque sculptures, added in the 17th century, along with the spire that instantly became a signature element of Riga’s skyline. In 1721 the spire was destroyed in a blaze despite Russian emperor Peter I personally rushing to the scene to extinguish the fire. A legend says that when it was re-erected in 1746, builders threw glass from the top to see how long the spire would last; a greater number of shards meant a very long life. The glass ended up landing on a pile of straw and broke into just two pieces. The spire ended up being destroyed again in WWII. When it was resurrected again, the ceremonial glass chucking was repeated, and this time it was a smash hit. Haggle for your huckleberries at this vast market, housed in a series of WWI Zeppelin hangars and spilling outdoors as well. It’s an essential Riga experience, providing bountiful opportunities both for people-watching and to stock up for a picnic lunch. Although the number of traders is dwindling, the dairy and fish departments, each occupying a separate hangar, present a colorful picture of abundance that activates ancient foraging instincts in the visitors.

In operation since 1570, the riverside market flourished during the mid-1600s when the city outgrew Stockholm to become the largest stronghold of the Swedish Empire. Laden with goods, boats travelling down the Daugava would meet here those traversing the Baltic Sea for a mutually beneficial exchange.

In 1930 the market moved to its current location on the border of Central Riga and the Russified Maskavas neighbourhood (‘Little Moscow’) to make use of the railway, which replaced the river as the principal trade route. Confronted with the market’s ever-growing size, the city of Riga decided to bring in five enormous German-built Zeppelin hangars from the town of Vainode in Western Latvia. These hangars – each 35m high – added 57,000 sq m of vending space, allowing an additional 1250 vendors to peddle their goods. Riga’s lavishly restored stock exchange building is a worthy showcase for the city’s art treasures. The elaborate facade features a coterie of deities that dance between the windows, while inside, gilt chandeliers sparkle from ornately moulded ceilings. The Oriental section features beautiful Chinese and Japanese ceramics and an Egyptian mummy, but the main halls are devoted to Western art, including a Monet painting and a scaled-down cast of Rodin’s The Kiss. A lovingly restored courtyard with several wooden buildings is the location of a very popular weekend market, where Rigans hawk their local produce – meats, cheeses, vegetables and even spirits. But there is more to it, with live concerts, performances and art exhibitions taking place outside the market days. Even if nothing is going on, sipping coffee in one of the on-site cafes and soaking in the atmosphere of an old Riga suburb is worthwhile. Check the website for upcoming events.